Unraveling the processes behind human organ formation is one of the significant biomedical challenges. While scientists have traditionally used animal models, they often differ in human-specific genetic and biological pathways, particularly during the development of the nervous system. The folding of the embryonic neural tissue into a neural tube is a key initial event towards the development of the brain and spinal cord. Three-dimensional organoids developed from human stem cell cultures present an important model system that can capture aspects of human development. However, conventional organoids can have reproducibility issues and varying morphology.  Organ-on-chip methods provide a controlled and scalable platform to cast the stem cells; however, this approach limits the process of self-organisation which is a key hallmark of development.  Thus, a methodology that can serve the dual purpose of allowing self-assembly and providing a reproducible and scalable system is required to study the development of the human nervous system. 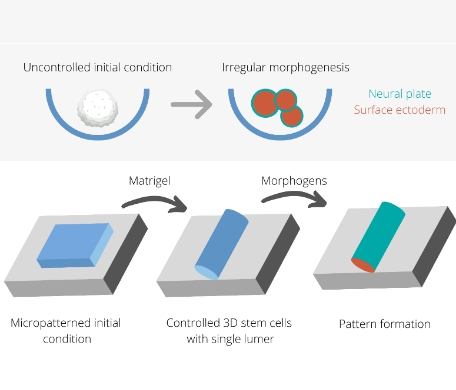 In a new study, researchers developed a system where using surface micropatterning they controlled the initial size, density of cells, and the shape of two-dimensional cultures. Subsequently, application of Matrigel, could trigger a transition from a 2D to a 3D layer wrapped around a lumen. This lumen was physically and chemically isolated from the in vivo environment to recapitulate the in vivo scenario. In addition, the tissue was exposed to a specific set of morphogens that are known to be involved in early neural development. In response to these cues, the self-organised pattern formation and tissue folding was achieved in a reproducible manner. Also, the process of folding and closure followed an in vivo timeline of five days.

A single cell RNA analysis confirmed the presence of different cell types in this system, including neural ectoderm, surface ectoderm cells and neural crest cells. In addition, specific molecular and cellular markers associated with neural tube development were also expressed. To test the validity of this system to model neural tube defects, three small molecule inhibitors that are known to target pathways associated with neural tube defects were used. Indeed, significant morphological abnormalities were observed in this case.

Neural plate is the ectodermal sheet that gives rise to the neural tube. The study found that the size of the neural plate determines the shape and number of neural tubes. Thus, the study also showed the role of geometry in dictating the neural tube formation along with the genetic factors.

This study developed a new approach to model human neurogenesis by creating a reproducible and scalable model system and also allows self-organisation, a key parameter of human development.