Microphysiological systems and their applications at InSphero

Microphysiological systems, which include spheroids and microfluidic systems, enable studies to understand the underlying mechanisms of diseases and promise to accelerate the development of drugs and predict how individual patients will respond to said drugs.

We have developed a unique combination of microphysiological spheroids and microfluidics to create highly scalable, modular, and tunable organ models that allow researchers to rapidly develop simple or complex organ models and networks. These models are based on the highly standardized, morphologically uniform microtissues that we have developed. Each microtissue is an accurate reproduction of various aspects of the native tissues they represent, such as cell composition, morphology, physiology, function and gene expression and is usable for up to 4 weeks in culture. 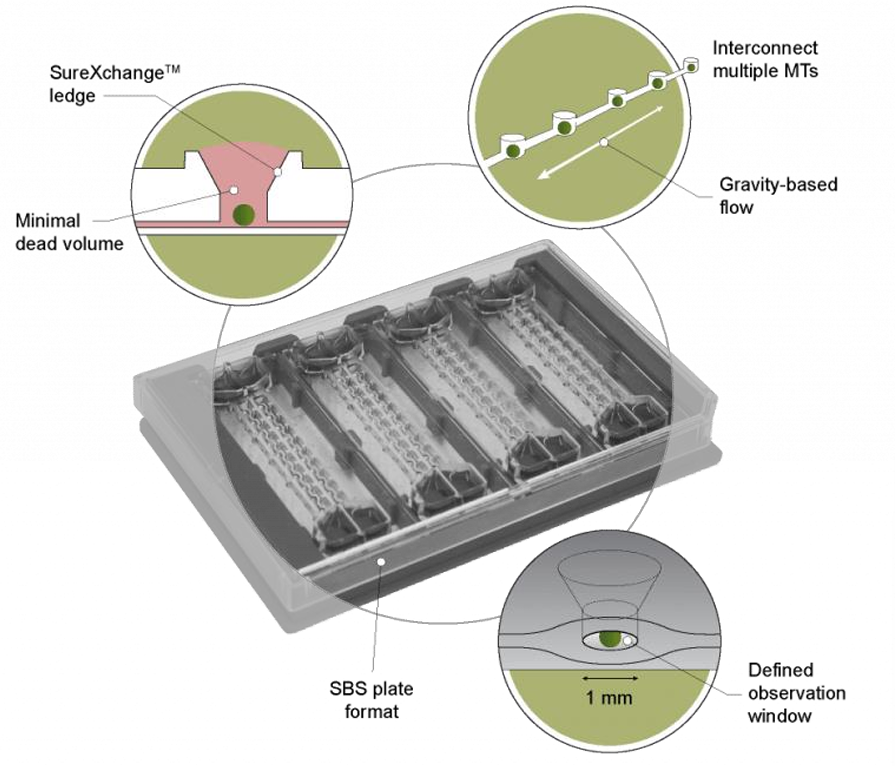 These microtissues are cultured in small volumes of fluid, enabling the rapid development of large numbers of physiologically relevant organ 3D models (up to 384) in parallel. Once the desired organ model is formed, it may then be transferred to any of our existing culturing platforms, including 96-well plates, 384-well plates, and Akura™ Flow systems. Importantly,  the same microtissues used to create the initial organ model can be used in subsequent mechanistic studies. Our Akura™ Flow systems are engineered for scalability, from the tissue model and culturing platform to operations and compatibility with automated handling with rigorous bioproduction and QC processes in place.

In addition to safety and toxicological applications, we have also been able to induce various disease phenotypes in our primary liver cells models such as NASH and NAFLD.  These are induced by specific diet-induced stimuli for 10 days eventually resulting in representative phenotypes seen in vivo human patient tissues. Therefore this has been demonstrated to be a valuable model to study and development drugs for inflammation,  steatosis and fibrosis that eventually lead to cirrhosis.