The recent decade has seen the rise of patient-derived microphysiological systems models that are paving the way for an efficient and personalized therapies for cancer and other diseases. In these specialized systems, it is often not possible to visualize and measure various culture conditions, including oxygen, metabolites etc. However, the cellular microenvironment is often key to cellular behaviors and physiology, making the monitoring of these factors of critical importance to establish a successful in vitro model. 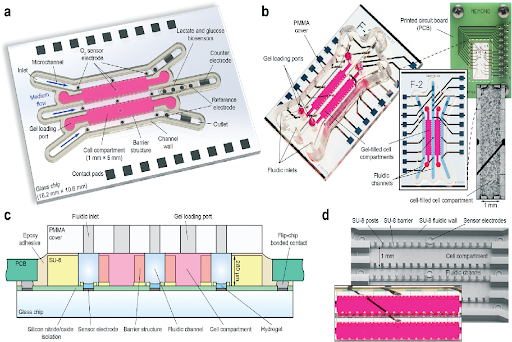 In a recent study, this aspect was explored by designing a matrix-based, heterogeneous 3D culture that had integrated sensors to measure parameters, such as oxygen, lactate, and glucose. The researchers used single, patient-derived, triple negative breast cancer stem cells that developed into 3D structures in two cellular compartments, while the cell culture medium was supplied via three adjacent microchannels. These channels also permit the control of drugs or other external stimuli. In the usual microphysiological systems made of gas-permeable material, such as PDMS, the gas composition is dependent on the gas exchange with the incubator environment. However, this system achieved an accurate control of dissolved gas and cellular respiration as it used glass, a gas-impermeable material which was gas-tight sealed. This also enables estimation of cellular respiration rate, as influx of new medium is the only source of oxygen molecules in this case. The microsensors for oxygen, lactate and glucose were integrated into the system for continuous monitoring.

Hydrogen peroxide (H2O2) in phosphate buffer saline (PBS) that diffuses in a manner to that of oxygen was used as the test species to study diffusion of the medium. To test the functioning of the sensor, initially the middle channel was perfused, keeping the other channels static. As soon H2O2 molecules diffused from the centre to the outer walls of the chip, the sensers showed a rise in signal based on the flow rate and concentration gradient. Conditions, such as hypoxia have been shown to be essential in cancer, and such sensors can provide real time information of cell culture conditions and metabolism.

The study also showed the implication of the position of sensors in the analysis. For example, sensors located in the cell chambers that measure the microenvironment around the cells, whereas the sensors located microfluidic channels can monitor the media supply.

Thus, this study highlights the importance of such systems that continuously monitor cell culture condition for successful application of microphysiological systems in personalised medicine.